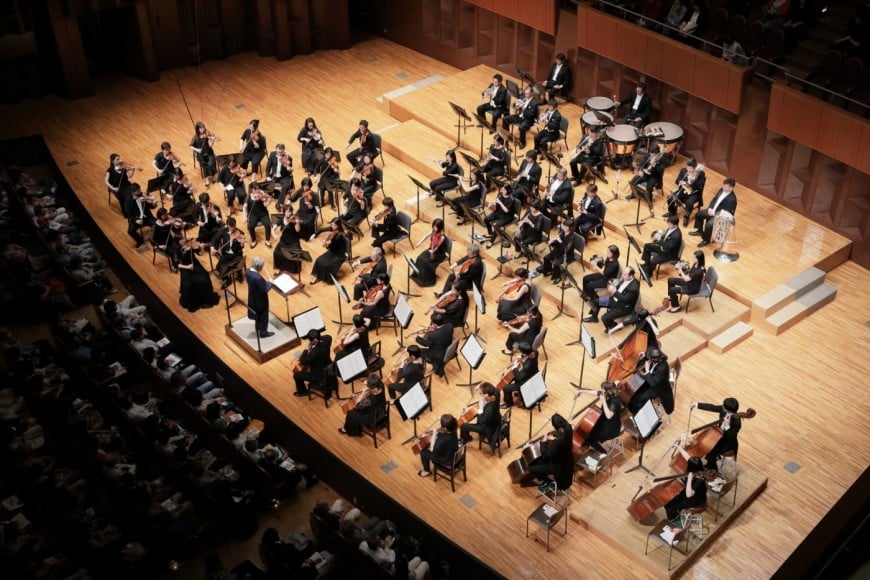 ©飯島隆
OSAKA SYMPHONY ORCHESTRA
Osaka Symphony Orchestra（OSO）, was originally founded as “Osaka Symphoniker” in 1980, and invited KOIZUMI Hiroshi as the initial Music Director and Permanent Conductor. Upon the launch of the orchestra, SHIKISHIMA Hiroko, our Honorary Founding President, raised the motto “Play music that satisfies both the audience and the musicians alike!”. Since then, the orchestra’s performance, which always enthusiastically moves the audience, has been acclaimed as “exclamation from the soul” and “sound of passion”.
In January 1992, we invited Thomas SANDERLING as our next Music Director and Permanent Conductor, with whom we were able to lay solid foundation as a professional permanent orchestra. In June 1996, we held our first concert in Tokyo（at the Tokyo Metropolitan Theatre）, which was to become the beginning of our non-regular series in the capital city of Japan. In January 2001, we renamed ourselves as “The Orchestra Osaka Symphoniker”, and invited SOGA Daisuke as our third Music Director and Permanent Conductor. In December 2002 we made our first international tour to commemorate the 100th anniversary of Romania-Japan relationship, followed by a visit to Hanoi to celebrate the 30th anniversary of Vietnam-Japan diplomatic relations. In September 2004, OHYAMA Heiichiro assumed the position of Music Adviser and Principal Conductor. In April 2006, HIGUCHI Takeo, Chairman and CEO (at that time) of Daiwa House Industry Co., Ltd. became the Chairman of the Board. He handed over this position to YOSHII Keiichi, President and CEO of Daiwa House Industry Co., Ltd., in October 2020. In April 2008, KODAMA Hiroshi took over the role of our 4th Music Director and Principal Conductor, whose activity and performance won considerable acclaim from various sides. In April 2010, we renamed ourselves again as “Osaka Symphony Orchestra”. In October 2015, we were chosen as the host orchestra of “Asia Orchestra Week”, a series of concerts within ACA National Arts Festival, run by the Agency for Cultural Affairs, and played in Tokyo （at the Concert Hall of Tokyo Opera City）and in Kitakami-city, Iwate-prefecture.
TOYAMA Yuzo, one of the eldest leaders of Japanese music scenes, who had been our Music Adviser, became our Honorary Conductor in April 2020. Also, OHTA Gen, who won the Audience Award while finishing in the second place in the 17th Tokyo International Music Competition for Conducting in 2015 started to serve as our Resident Conductor in April 2019.
In April 2022, three conductors are assuming positions at OSO: YAMASHITA Kazufumi as the Permanent Conductor, SHIBATA Maiku as the Music Partner and TAKAHASHI Naoshi as the Principal Guest Conductor. OSO is now expected to make further progress under their directions.
Official Website: https://sym.jp 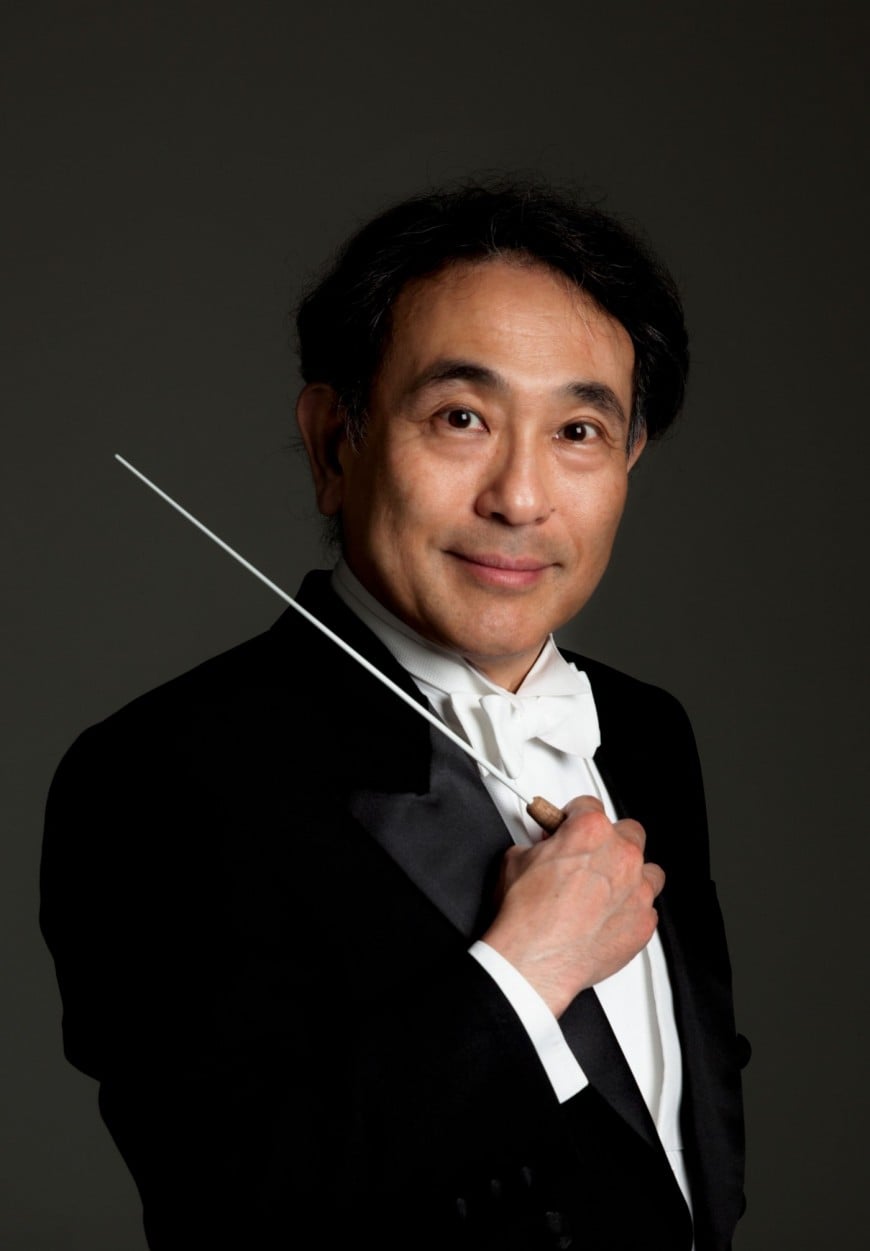 ©ai ueda
Kazufumi Yamashita (conductor)
After graduating from the Toho Gakuen School of Music in 1984, Kazufumi Yamashita went to Berlin to continue his study of conducting at the Universität der Künste Berlin. And in 1986, he won first prize of the Malko Competition, Denmark.
Yamashita worked as an assistant for Karajan since December 1985 until his death. He accumulated his career in Europe steadily by working with Danish Radio Symphony Orchestra and other orchestras. While doing so, he was appointed as the principal guest conductor of the Helsingborg Symphony Orchestra in Sweden and worked there for 1993-1998.
In Japan, he made his debut with the NHK Symphony Orchestra in 1988, and since then, he worked with other major Japanese orchestras regularly with high acclaims; the Principal Guest Conductor of the Orchestra Ensemble Kanazawa (1991-1993), and the Regular Conductor with the Kyushu Symphony Orchestra (1996-1999). He also worked as regular conductor with the Osaka College of Music’s College Opera House Philharmonic Orchestra (2002-2008). In autumn 2005, their production of “Silence,” an opera composed by Teizo Matsumura was invited to the New National Theater. The opera under his button made an amazing success and stimulated Tokyo’s music scene. Since April 2008, he has been Honorable Conductor of this college orchestra.
Since April 2006, he has been the conductor of the Sendai Philharmonic Orchestra, and has been the Resident Conductor as of April 2009 until March 2012. He has developed the orchestra’s activities including the production of CDs of R. Strauss’ Tondichtung “Ein Heldenleben,” Rimsky-Korsakov’s Scheherasade, Schumann’s Symphonies Nos. 2 and 4.
He was awarded the “17th Mitsubishi UFJ Trust Music Award” for the performance of Verdi’s “Falstaff” presented by the Aichi Prefectural Cultural Foundation in September 2008. Also, it is worth noted that he conducted the Saint Petersburg Philharmonic Orchestra in April 2009, and made a great success. And in February 2011, he did the Japan premiere of Schumann’s opera “Genoveva.”
He is currently one of the most remarkable conductors that have firmly accumulated the continuous success in both operas and orchestras.
He is currently Music Director of Chiba Symphony Orchestra since 2016 and a professor of Tokyo University of the Arts. He will assume a post of Music Director of Aichi Chamber Orchestra and Permanent Conductor of Osaka Symphony Orchestra from 2022/2023 season. 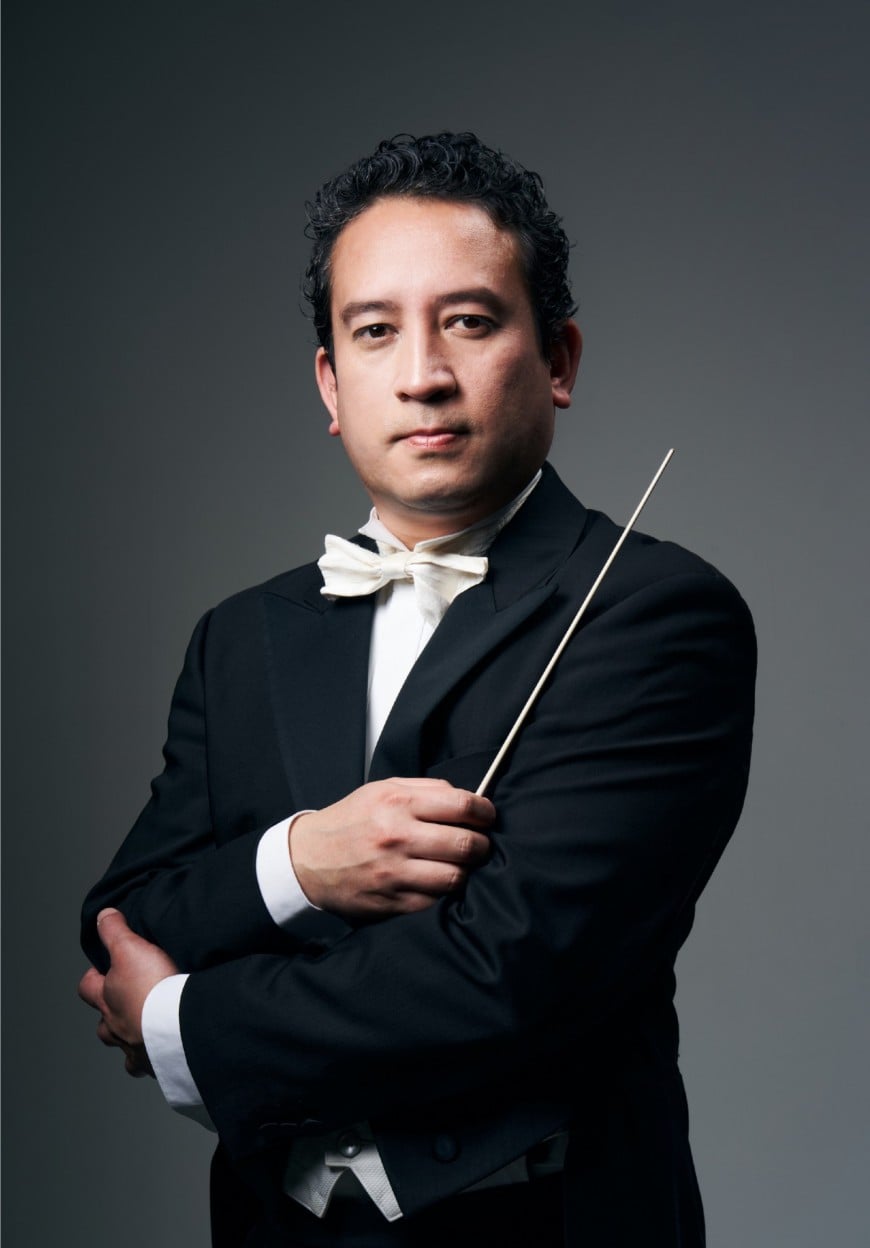 ©T.Tairadate
Maiku SHIBATA (conductor)
Born in Tokyo in 1978. After graduation from the Vocal Music Department at Kunitachi College of Music, honed his skills as choral conductor and assistant conductor with the Fujiwara Opera, the Tokyo Chamber Opera Theatre and others.

Went abroad to Europe in 2003 and, while gaining his skills by working with the opera houses and orchestras of Germany, received the Diplom at the Universität für Musik und darstellende Kunst Wien (University of Music and Performing Arts Vienna) master course. Conducted the Vidin Symphony Orchestra (Bulgaria) at his graduation performance. Also conducted the Prague Chamber Orchestra as a guest performer at the Hannover Silvester Concert (Germany) at the end of 2003, and also guest conducted the Berlin Chamber Orchestra at the end of 2004, thus garnering great successes by conducting two Silvester Concerts in two consecutive years.

In 2005, Shibata successfully auditioned for the role of assistant conductor of the Gran Teatre del Liceu (Barcelona, Spain). His experience as an assistant to conductors such as Sebastian Weigle, Antoni Ros-Marba, Renato Palumbo, Josep Vicent, where Shibata gained a great amount of trust at the performances in dealing with many directors and vocalists, set the foundation for Shibata as an opera conductor.

After returning to Japan, Shibata became active primarily as an opera conductor, and in 2010 made his debut at the Japan Opera Foundation (JOF) with “The Death Goddess” composed by Shin-ichiro Ikebe. In the same year, Shibata was awarded with the Gotoh Memorial Foundation Opera Newcomer Award, and went abroad to Europe again, working as an apprentice primarily in the Italian opera houses. He made his first professional debut with the Fujiwara Opera conducting Giuseppe Verdi’s “Un ballo in maschera (A Masked Ball)” in 2013, and added to his list of successes by guest conducting Kan Ishii’s “Kesa to Morito” in 2015, as well as Giacomo Puccini’s “Tosca” in 2016. Shibata conducted Jules Massenet’s “La Navarraise” (first Japan performance) in 2018, Giacomo Puccini’s “La Bohème” in 2019, Giuseppe Verdi’s “Rigoletto” in 2020, and Vincenzo Bellini’s “I Puritani” in 2021 with the Fujiwara Opera. He has furthermore conducted at Sakai City Opera, New National Theatre Tokyo Opera Studio and others. He has established a reputation for creating dramatic yet graceful music.

From 2022/2023 season, he will assume a post of Music Partner of Osaka Symphony Orchestra. 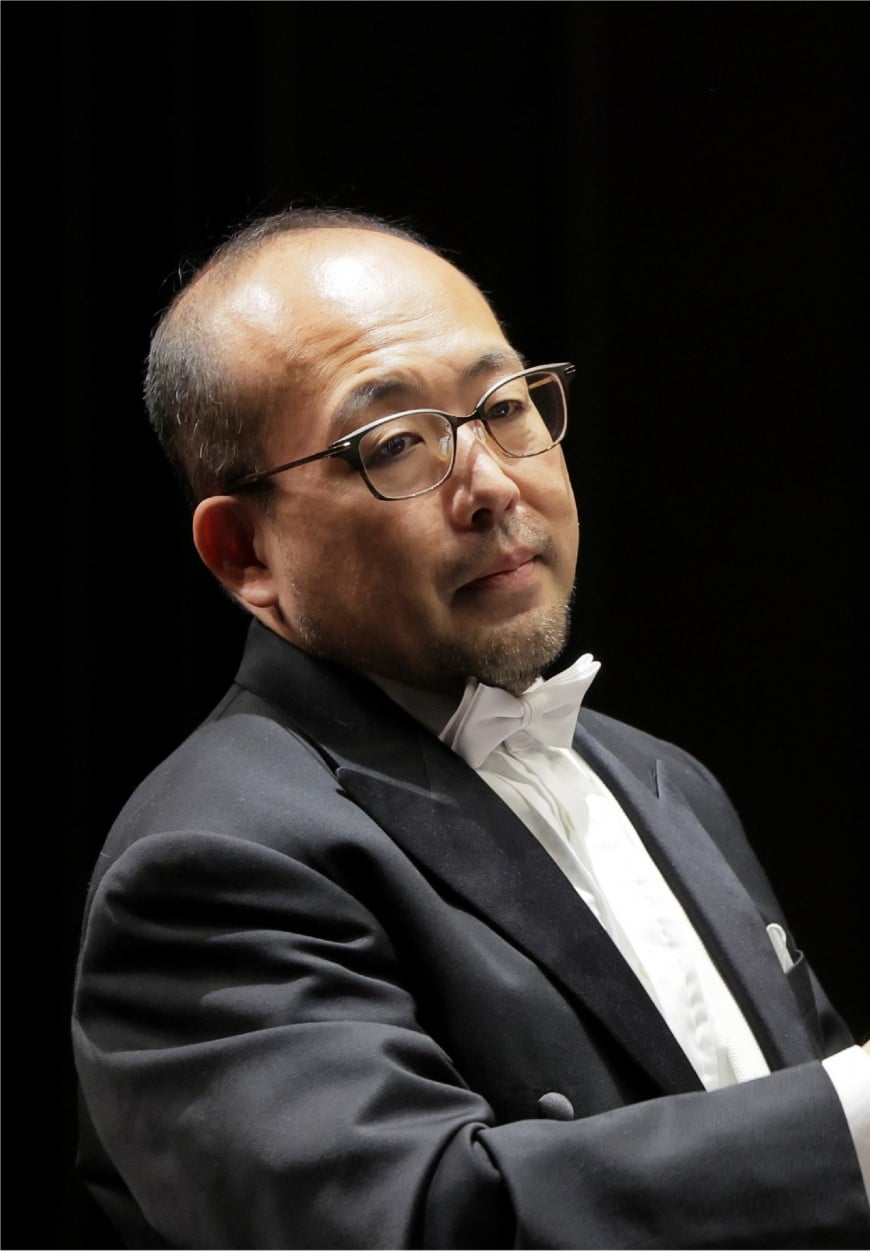 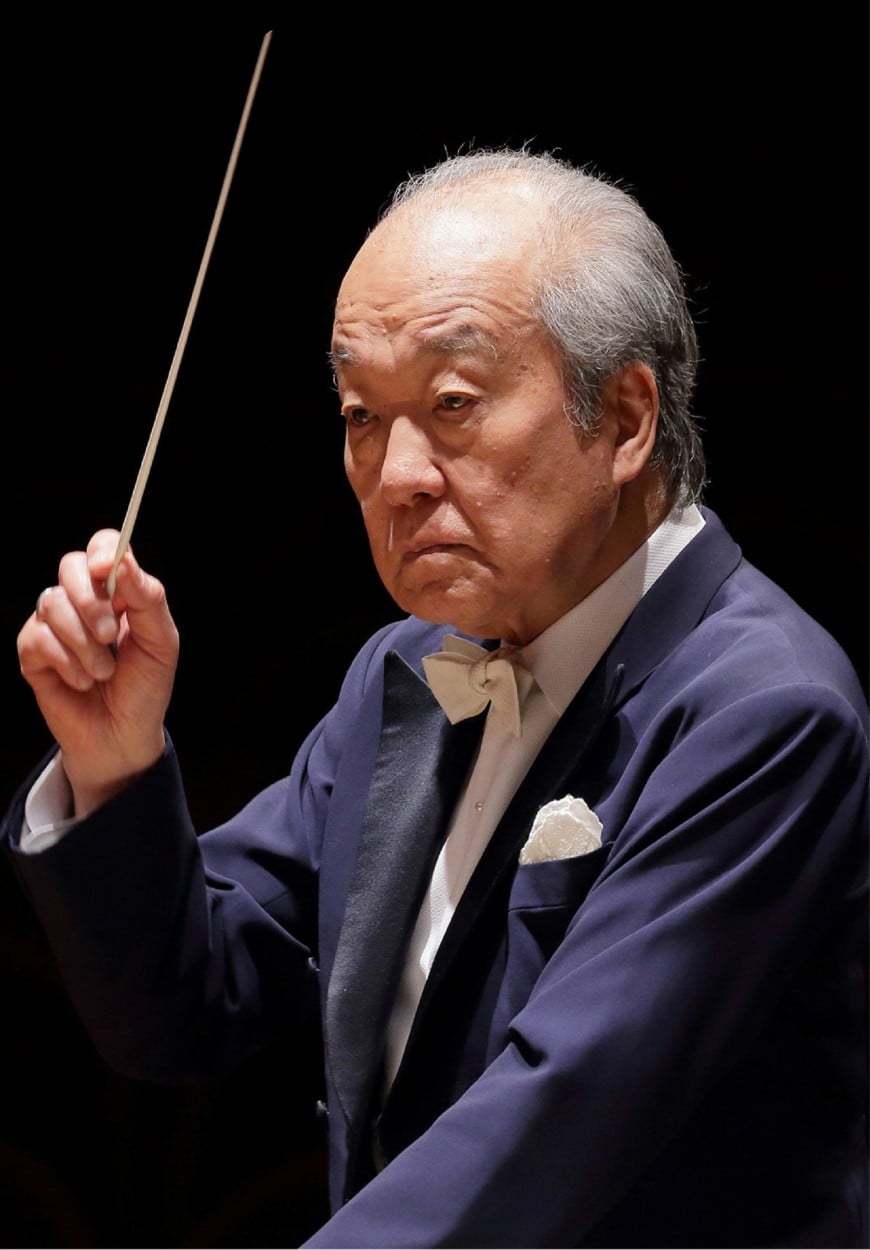